This is where customers help other customers. Find useful information in existing discussions or ask your questions.

You will find tips and tricks about train travel here.

You will see the latest posts from all areas of the Community here.

Hello and welcome to the SBB Community. What would you like to do?

Flirting on the train.

1.3 million people in Switzerland live on their own. While this doesn’t necessarily mean that they’re all single, one thing is certain: more than 1 million passengers travel with SBB every day, making the train a great place to get flirting! Hop on board and strike up a conversation with that cute stranger between stops. I asked flirting coach Thomas Peter for some tips on how to make a great impression. 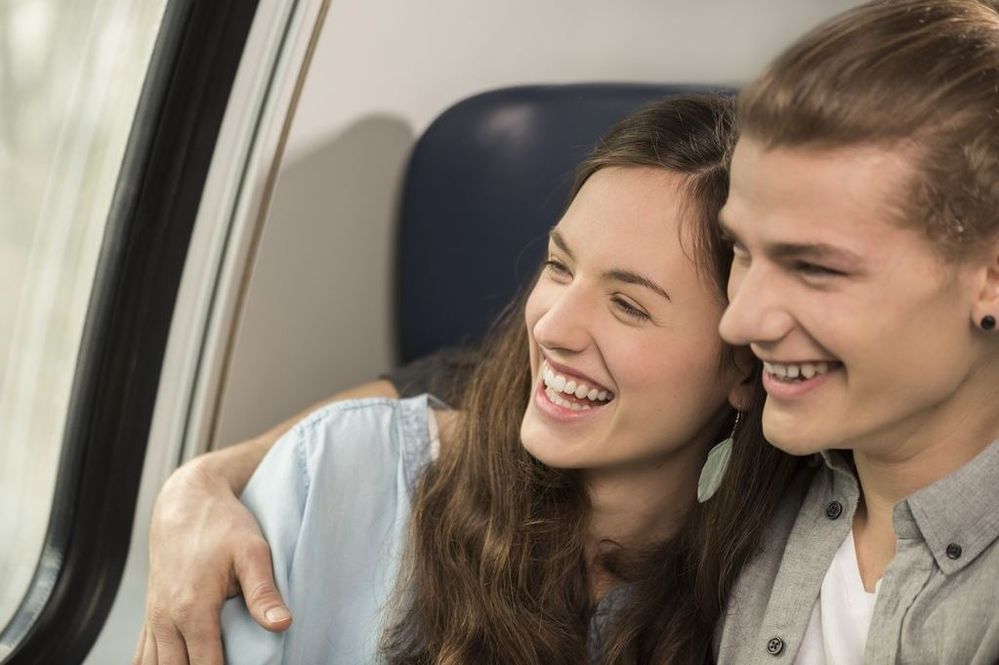 Mr Peter, as a flirting coach, can you recommend travelling by train?

First we need to be clear about what flirting really means. Engaging in lively conversation, showing interest in a fellow passenger, teasing someone in jest or perhaps even giving compliments (but please, only genuine ones – don’t go overboard!) – these are all forms of flirting. If both people seem interested and want to see each other again, things can go further – but it doesn’t have to work out that way. Simply enjoying the moment also has its value. The most important thing is for everyone taking part in the conversation to feel happy. Perhaps the two of you hit it off, but once the conversation is over, you simply wish each other all the best and go your separate ways. After all, why not? But of course, seeing each other again would be better.

So, to finally answer your question: yes, the train is a good place to meet people and flirt, as long as you use your common sense and make sure that your target is also in the mood for talking. If that isn’t the case, you have to just let it go. If you want to keep in touch, why not simply say: “I bet I’m not the first person to ask for your phone number on the train.” This shows you have a sense of humour and are able to laugh at yourself – an important trait to have!

Let’s imagine I get on the train to Berne at Zurich. In the next compartment I spy an attractive man sitting alone and staring at his smartphone. I’ve got an hour to strike up a conversation with him. What’s the best way of going about it?

In my flirting course, you learn that there aren’t any specific instructions – instead, you have to learn to use the situation to your advantage. Instructions may or may not work, depending on the other person’s mood – and yours. One thing’s for certain: don’t bother memorising chat-up lines!

So, here are some tips: you could ask him about something that the two of you have in common. You’re already sitting on the same train, on the same route. Anything to do with travel connections, the direction you’re currently going in, and so on, are possible conversation starters. Remember that, as experience has taught us, it’s not necessarily what you say that counts, but how you go about it. The most important thing is to just say something. Even if you’re rejected, you’ve still gained some experience! After all – nothing ventured, nothing gained.

Perhaps you could try this little trick – phrasing it however you like, of course: “I hope you don’t mind me being cheeky and asking you a question… I’ve just been wondering whether people would talk to each other more on the train if mobile phones didn’t exist?” … and there you have it, you’re in the middle of a conversation. By opening with “I hope you don’t mind me being cheeky” or “I can’t resist being cheeky”, for example, you catch your target off guard. He can’t think “how cheeky of her to just start talking to me like that”, because you’ve already said it yourself. Instead, this opener will pique his interest. Of course, this example works just as well in the reverse situation, with a man approaching a woman.

Let’s imagine a different situation. I take the same S-Bahn train every morning. For a few weeks, I’ve had my eye on an attractive man who takes the same train – but the carriage is always packed full of other people. How can I approach him or flirt with him discreetly during rush hour?

Perhaps you could just try a simple comment, such as: “Here again? I’m sure I’ve seen you on this train a few times before!” Or even just: “Good morning!” It’s easier than you think! “Just one more day, then it’s the weekend” is another option. Just see what signals you get in return. You may be surprised!

As a woman, should I flirt differently to men? Or, in other words, are there different flirting tips for men and women?

In principle, you can do whatever you like. There’s no rule that says you can’t approach people. Of course, I would say to men that they must be careful to get the balance right, to “stay on the ball” without being pushy. A lot of women say that men should give the impression that they know what they want. However, a man who is a bit sheepish when striking up a conversation and acts like he doesn’t expect it to go well can also succeed in breaking the ice with his humour. Many women find this positive – as long as it’s charming. What’s important is that he gave it a go. Women have always liked men who do the approaching – but there’s nothing to stop them making the first move themselves these days. However, the conventional roles still hold true to a degree.

If a woman actively tries to strike up a conversation, all the better! Nonetheless, I think we’ll carry on seeing women take the more passive role in the future, albeit one where they perhaps give clearer signals so the (possibly shy) man can be sure that they want to be approached and won’t **bleep** his head off. A nice smile can work wonders.

Let’s imagine that I’ve plucked up the courage to approach a man on the train. I ask him: “Excuse me, does this train stop in Olten?” How do I work out whether he’s interested in me or just the timetable?

At the very least, you’ll get the short answer, “yes”, and that’s that. Try rephrasing the question: “Can you tell me which stations this train stops at?” Then the other person has to say a bit more. Once you’ve told him where you want to get off, you can go on to ask him whether he’s on his way to work or whatever. Take note of the balance between the questions you’re asking and the answers he’s giving – they should be around the same length.

All right, let’s imagine that I’m on the train and I notice a man who keeps staring at me. How do I show him that I’m not interested?

Simply avoid looking at him. Unfortunately, there will always be gawpers. Some men just don’t realise when a woman doesn’t want to make eye contact.

Thomas Peter is a flirting coach and offers courses for individuals and groups.

You must be a registered user to add a comment here. If you've already registered, please log in. If you haven't registered yet, please register and log in.