Winter service: so that trains can continue to run despite the snow and ice.

Snow on a ski slope is a beautiful thing. But when those pretty white crystals fall on tracks, points and platforms, rail traffic can be disruptedand trains can be delayed. To prevent this as best it can, SBB begins to prepare for its winter service way back in late summer. 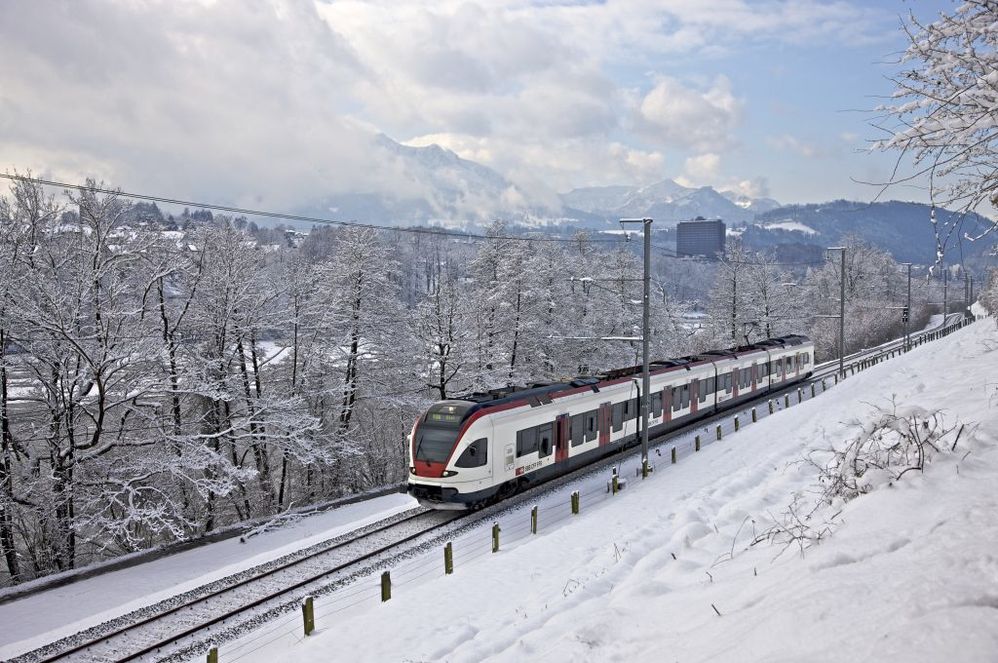 Then, when temperatures plummet and Jack Frost covers Switzerland in a cold, white blanket, several hundred SBB employees will be ready to clear away the snow. Some gritting, shovelling, ploughing and brushing will be called for. And that’s not all by any means! SBB is preparing for the winter by taking a variety of precautionary measures.

So that the points don’t freeze, they are heated to ensure that they can be changed even in subzero temperatures. There are 7,400 point heaters across Switzerland. They switch on and off automatically, depending on the data they receive from the weather station and the temperature sensors on the tracks.

To clear away the snow and de-ice the points, the teams use special brushes and shovels or even blowtorches. In heavy snowfall, snow blowers and snowploughs are used.

As well as white salt, SBB also uses a pink variety. This is more expensive, but it is effective down to minus 21 degrees Celsius for a period of 24 hours.

During the night, the trains are connected up to heating systems so that, by morning, they are already pre-heated for the passengers. This also prevents ice forming on the windows.

If there is a lot of snow and the temperatures have plummeted, driving snow collects under the train. The flow of air freezes the snow into blocks of ice. This leads to ice and snow weighing up to four tonnes collecting under each coach. When it gets warmer again or the train travels over some points, these giant pieces of ice can come away and fall onto the **bleep** between the tracks, causing it to be picked up and thrown through the air. This phenomenon and its risks can be avoided if the trains travel more slowly. So although there may be delays, it is safe to travel.

SBB constantly analyses meteorological information in winter. The weather conditions are monitored at each station on SBB’s network in order to manage the snow-clearing teams in a targeted manner. By the end of March, over a hundred SBB employees work tirelessly day and night if necessary so that the trains can continue to run in snowy and icy conditions.

The aim of all these efforts is clear: to ensure that the passengers arrive safely and on schedule, even in wintry conditions. Despite all the careful preparations, however, snow and ice can lead to delays. The trains’ speed must sometimes be adjusted  because of the risk of being hit by flying ice, for example. Boarding and disembarking from the trains may also take longer than usual because the trains are busier – on icy winter days, many drivers leave their cars at home and take the train instead.