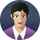 Last evening (28 February 2020), I took a train which departed from Zurich at 17:30 to Geneva. When the train was approaching Fribourg station, I saw a thin, tall black man with afro hair covered his face purposefully spit in public at the entrance of the train before the train stopped at Fribourg station. He then walked up to the second deck of the train to continue his journey. I was very concern about his action, and his spit might contained gems, bacterias, virus, which are contagious. I hope that the train crews will disinfect the train more often, and punished commuters who has the intention to spread virus to others.